This was a day hike that I decided to check out back in 2016.   Originally, this was posted on my WordPress site, but I’ve rewritten the article a bit, changed out a few photos and moved it to our website.

The trek itself, when done correctly, is about 5 kilometers.  Maybe for some people this will happen quickly but for me, the trip was 4.5 hours.   The good news is the final destination is at a lower elevation but of course that is not how it is going to start. There is a shorter version of the trek that takes only 1 hour; at least that is what we heard. 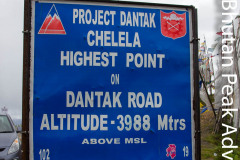 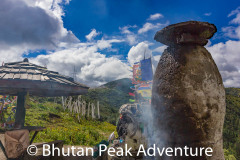 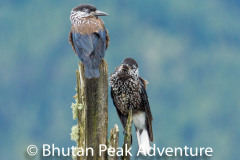 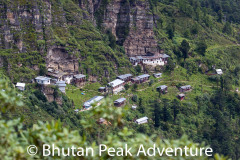 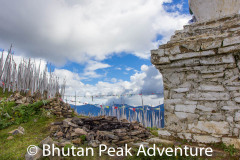 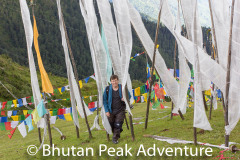 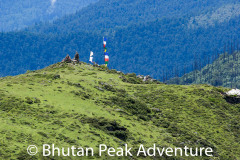 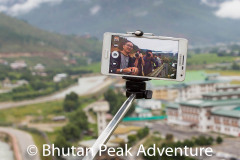 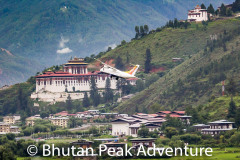 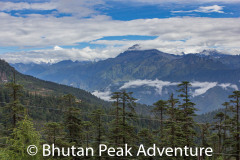 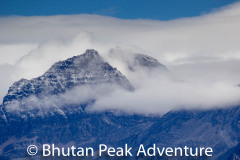 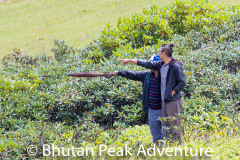 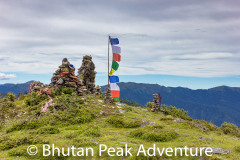 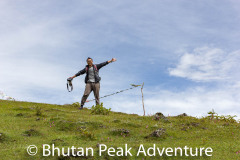 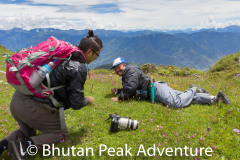 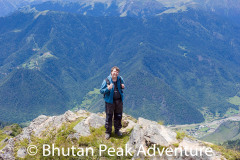 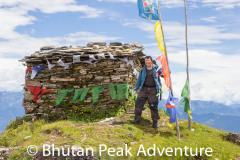 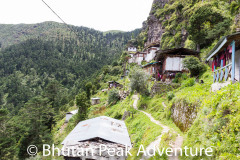 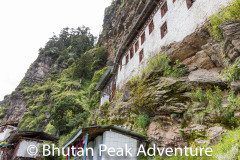 We had a very simple task, drive to Chele La pass, the highest motorable pass and follow do a quick 30-60 minute hike down to the Kila Gompa Nunnery so that I could photograph birds that I found along the way along with any interesting scenery.

Chele La pass is visited quite heavily during the winter months because of its high elevation of 3988 meters and the chances for snow.  It is always quite cold compared to everywhere else.  One summer, I have left where the temperature was 30 degrees Celsius and by the time we reached Chele La, the temperature had dipped to 10 and we could hardly get any photos because it was just too cold to stand around outside without a coat.  Even the drive down the other side of the mountain to Haa didn’t make it that much warmer.

On my trip once I got out of the car, there were a couple of spotted nutcrackers hanging out on an old tree.  Unfortunately, this turned out to be the only useful bird pictures of my trip.   The rest of the trip was through a dense forest; I could hear birds and occasionally spot them but the lighting conditions made it impossible to photograph anything.

For our hike, we decided to start hiking upwards to the various stupas at the top of each hill.  The first one looks like it is close and measuring later on Google Earth, it was only 1.5km away.  Given the altitude and my limited acclimatisation, the 1.5km took what felt like an hour of dragging my feet.  It was quite embarrassing actually; it felt like I’ve never exercised in the past several years…huffing and puffing just trying to move the legs.  The problem of course is the lower amount of oxygen at this altitude really wears you out.   At sea level there is about 20% oxygen in the air and at Chele La is about 13%.

After reaching the “top” of today’s travel, which was not all that far, we headed back down the hill to the stupa where we started a rather steep descent down into the woods.  It was a very pleasant walk and generally quite easy.

About halfway through the hike we arrived at a problem; a fork in the path with the choice between going down a nice road or going up a small narrow path.   Given that we were trying to go down to the nunnery, we made the obvious, but incorrect, choice of continuing down.  An hour later we arrived at what was essentially a dead end.  Although we were only about 100 meters from the car pickup point, we couldn’t actually tell which way to continue and the sunlight was beginning to fade. After consulting with a few people through a phone call we had to make the harsh decision to walk back up to the fork in the path so that we could exit out to the road before dark.   That was one of those very unpleasant type walks knowing that we were giving up and yet still having to walk up the hill gaining several hundred meters just to give up.

We eventually stumbled onto the road waved down a local truck and hopped into the back.  The car driver wondering what had happened to us.   From there it was to the hotel for the night and we made a decision that we would try again one more time tomorrow.

We woke up quite early and asked for a 6:30 breakfast (I think the hotel staff were probably not keen on starting that soon) so that we could be moving 7am to drive back up again to Chele La pass for attempt number two.  The 30-minute drive up was certainly not something that I really wanted to do, especially if we ended up getting lost a second time.

First order of business for the day was to stop at the airport lookout point to see if we can get a nice photo of a plane taking off with the Paro Dzong in the background.   Luckily for us, the Drukair ATR was heading out to Bumthang so this is the one I captured that you’ll see in the gallery above.

Now that the airplane picture is secured, we head up to Chele La pass to see if we have some better luck today.  The drive up to Chele La revealed dozens of birds on route for the people interested in birdwatching.  Given that we were sort of anxious to reach the pass, we didn’t bother stopping to get any of the bird photos but of course now I wish I had.

As we reached the top, we were treated with a clearing sky, something that almost never happens during the summer months.  We even managed to catch a quick glimpse of Mount Jomolhari.

Starting our hike again, I noticed that my legs and breathing actually seemed to have acclimatized to the higher altitudes compared to the day before. I’m not struggling every step of the way.  We quickly and easily reached the first stupa and decided why not go higher to the second stupa.   Reaching the second stupa we decided that we would go just one more stupa and then turn around back to the steep decent and do our hike.

A Local Guide to Help

Along the way, we came across a small house but it was locked up and nobody was around and we started to carry on to our 3rd stupa. About10 minutes after passing the house we noticed that somebody coming towards us and Dawa ran back to ask for directions to see if it is possible to carry on forward to the sky burial area and still and make it to the nunnery.

It turns out that the man is a worker who is responsible for the telecom tower on one of the peaks and agrees to go along with us to show us most of the way.

The highest point on our journey, at an elevation of 4175 meters, is the “Sky Burial Area”.  Rather than burying young children, the local people place the dead bodies on the tops of the mountains to let them decompose and be taken away by the birds.  Unfortunately, the birds don’t always do the job and it is sometimes just stray dogs that come. Now that we are passed the highest point, the rest of the trip is downhill.

After navigating some tricky bush sections, the local guide is handed some money for helping us and we continue on our own. All goes well for about 15 minutes until we end up in the woods and of course get lost one more time.  We eventually worked out way down through some mossy and slippery rocks in a small river.  I don’t know if this was the instructed path but we didn’t find any others but we did manage to find our way out and the nunnery that we were aiming for.

The total hike took us about 4 and a half hours.   The car driver once again wondering why our 1 hour hike took so long.

Overall it was a great half-day hike and a really good day given the weather.  Of course, with the high altitude you should really need to put on sunscreen before heading out.  We didn’t put any sunscreen and of course my face turned red and peeled for several days after the hike.

However after finding the hike path, we now use it in our itineraries for guests who are interested in some more challenging half-day hikes.

If you found this post helpful, you will also enjoy my newsletter "Adventures in Bhutan". The newsletter is published monthly and contains the stories posted here along with special offers.

Your email address will not be shared, it will be used only for the purpose of the monthly newsletter and it will be easy to unsubscribe.